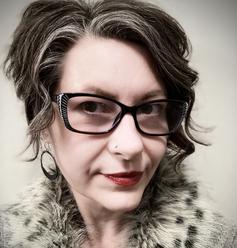 Originally from the Washington DC area, Anastasia Osolin has a B.F.A. in Illustration from the School of Visual Arts in New York City, where she studied painting and fell in love with the Dada and Surrealist art movements, especially the work of Joseph Cornell and Remedios Varo.

​After art school, her devotion to her other great love--books--led to an apprenticeship in bookbinding and restoration. Since 2000 Anastasia has worked as a freelance specialist to the antiquarian book trade, giving new life to ailing books. ​

As an artist Anastasia is primarily motivated by an enduring fascination with all things old and peculiar. She spends a disproportionate amount of her time making collages and assemblages from a wide variety of found objects and imagery, drawing inspiration from (among other things) the history of science & astronomy, mysticism, art history, Victorian ephemera, and industrial decay (i.e. just about anything old and rusty).

Anastasia’s artwork may also be seen on Facebook, Instagram, and on the walls of the Adirondack Artists Guild in Saranac Lake, NY, of which she has been a member since 2016.